Since I haven’t been lucky enough to find the Carnation condensed soy milk (or I have been too lazy to actually look for it), I made my own almond condensed milk using this recipe from Veganbaking.net. I made it the night before in a slow cooker and it was incredibly easy. 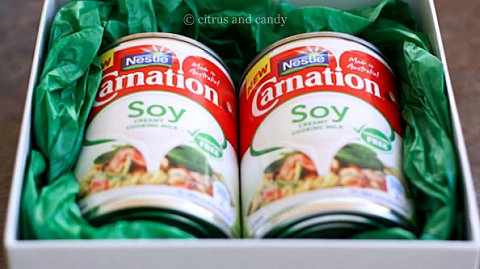 After I made my condensed milk, I put it in the refrigerator overnight and made my Arroz Con Leche recipe in the morning. If you’ve never had Arroz Con Leche, it is a delicious rice pudding traditionally served with raisins and cinnamon, with the option of adding chocolate, nutmeg or citrus zest.

In a small saucepan, add rice, non-dairy milk (or water if you don't have any) and cinnamon stick. Bring to a boil, then reduce heat immediately and simmer until milk or water is absorbed - about 10-15 minutes.

Add non-dairy condensed milk and raisins. Stirring regularly, cook uncovered until milk is combined, which took me about 10 minutes.

Remove cinnamon stick and serve garnished with ground cinnamon. I like to eat mine cold, but if you can't wait any longer, go on and eat it warm because it's still tasty!

"They say you are what you eat, so I strive to be healthy. My goal in life is not to be rich or wealthy, 'Cause true wealth comes from good health and wise ways... we got to start taking better care of ourselves " - Dead Prez

More From This Chef »