This simple marinated cucumber vinegar salad with dill is fresh, crunchy, sweet, tangy, and versatile! With just 10 minutes of prep and some marinating time, this healthy cucumber dill salad is ready to serve at potlucks, BBQs, dinner parties, and more!

Whether you’ve grown up enjoying some version of cucumber salad or they are new to you, this marinated cucumber vinegar salad embodies everything summer. It’s healthy, vibrant, fresh, and a perfect combination of sweet, salty, and tangy. And all with just a handful of inexpensive pantry staples and some cucumbers!

Unlike most salads that we chuck chopped cucumber into, this one has a delicious twist. This cucumber dill salad marinates cucumbers in a vinegar sugar mixture for a healthy, low calorie, yet vibrant and flavorful summery side dish.

Minimal effort (no peeling or de-seeding!), quick to prepare, flavorful, and low budget—what’s not to love? Simply slice and sweat the cucumbers, prepare the marinade, combine the two, and marinate to perfection! Cut the prep time further by using a mandoline or food processor disk for the slicing.

Looking for more simple vegetable side salads? You might also like this vegan calabacitas, bean salad, vegan coleslaw, or mango cucumber salsa.

All you need are five inexpensive ingredients (plus salt and pepper) for this easy cucumber salad.

Lemon or lime juice would work in place of the white vinegar. You could also experiment with rice vinegar or red wine vinegar in place of either vinegar.

This easy recipe can be adapted and boosted in several ways. This includes the addition of:

How to Make Cucumber Salad?

There are just a handful of low-fuss steps required to prepare this cucumber vinegar salad, including:

For a crisper salad, combine the vinegar and sugar only, and then add ice cubes to the salad while it marinates. This helps it chill faster, marinate quicker, and keeps the cucumbers crisp.

This salad requires two hours of marinating time, so factor that in when you plan to serve it. Otherwise, this marinated cucumber dill salad doesn’t store particularly well before becoming soggy. We recommend eating it within 1-2 days, though it should be okay for 4-5 days.

Before serving, add some extra cucumber slices to add extra ‘freshness’ back to the dish.

We don’t recommend freezing the marinated cucumbers, either, as cucumbers don’t freeze well. You can, however, prepare the vinegar marinade up to a week in advance and store it in the fridge.

Do I need to peel the cucumbers?

I like to keep the cucumber peel as it adds extra crunch. However, peel the cucumbers if preferred.

What are the best cucumbers for cucumber salad?

It’s best to use either English or Persian cucumbers. These contain fewer seeds, and both have a thin peel, so they don’t require de-seeding or peeling. Depending on where you live, there are small Asian cucumbers that work very well, too.

Why is the cucumber salad watery?

There are several reasons this could be. First, if you haven’t allowed the cucumber to sweat (or sweat them for long enough). Second, even after sweating, the cucumbers will continue to release liquid, so it will become watery if you leave it too long.

You can also reduce or eliminate the added water in this cucumber dill salad recipe.

Do I have to use water?

We know it seems a little odd to drain the excess liquid from the cucumbers and then add separate water to the marinade. But it just works.

However, feel free to experiment with omitting the water and increasing the vinegar and sugar instead, though more tweaks may be needed. If doing so, the marinated cucumbers will only require 30 minutes of marinating time.

How to Serve Cucumber Vinegar Salad?

This versatile marinated cucumber vinegar salad will pair with all sorts of meals. It’s probably easier to ask what it doesn’t go with. Here are just a few optional pairings.

Or browse through our entire list of budget-friendly vegan salad recipes)! 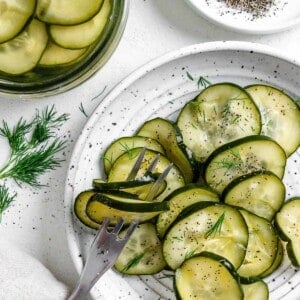 View all posts by Marji Beach