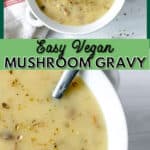 This 9-ingredient, one-pot, easy vegan mushroom gravy is creamy, savory, umami-rich, and super simple to prepare! Perfect for serving as part of a mid-week meal, over a big bowl of creamy mash, or for impressing at Thanksgiving/ Christmas!

I’m not sure about all of you, but we here at PBOAB love serving two types of gravy at our Thanksgiving table! So with the holidays fast approaching, it’s the perfect time to share this hearty, flavorful, easy vegan mushroom gravy recipe (perfect alongside regular vegan gravy)! This mushroom onion gravy requires just 9 simple ingredients (pepper included), around 40 minutes to prepare, and is loaded with rich mushroom flavor!

I mean, is a roast dinner plate even complete without a hearty serving of gravy? Or a big bowl of creamy mashed potatoes? Gravy is the ‘cherry on top’ of the savory world, and this mushroom onion gravy isn't playing around. Not only is it packed with flavor, but it’s made with no ‘special’ or hard-to-find ingredients. In fact, we even used button mushrooms—which are one of the cheapest and easiest to source mushrooms available.

And we might be a little biased, but we also think this homemade mushroom gravy tastes so much better than store-bought vegan gravy we’ve tried in the past (and cheaper, too!). Even better, you can easily prepare it gluten-free, oil-free, with fresh or dried mushrooms, and flavored in various ways! Meat eaters and vegetarians/vegans alike will enjoy this one.

In fact, it's so good you probably won’t have any leftovers (we don't). However, if you do, it also stores and reheats well! Which means it’s also great to make in advance for the holidays (one less thing to worry about on the day!) We love it so much that we’ve pretty much been making this gravy since 1995! (inspired by The Globe in Seattle who sold a biscuits and gravy dish to make you swoon!)

We love the base vegan mushroom gravy recipe because it’s wonderfully budget-friendly while still tasty. However, if you want to mix things up a bit and/or have some of the extra ingredients listed below in your kitchen already—then feel free to experiment!

How to Make Vegan​​​​ Mushroom Gravy?

Transfer any leftover homemade mushroom gravy to an airtight container and store it in the fridge for 4-5 days. You should also be able to freeze it for up to two months, either in a container or Ziplock/Stasher bag.

When you want to use it once more, you can reheat the mushroom sauce either on the stovetop or in the microwave. If it has thickened (which it tends to do as it sits), add an extra splash of vegetable broth or water to the gravy to bring it to your desired consistency.

How to Serve Vegan ​​​​Mushroom Gravy?

We could probably pour this creamy vegan mushroom sauce/gravy over almost anything savory that you put in front of us. But here are some of our top favorite serving options!

You might also enjoy browsing through our collection of 45 vegan thanksgiving dishes! 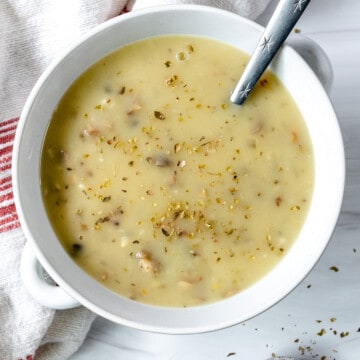