Make light and fluffy vegan lemon buttercream frosting with just 3 base ingredients (regular or keto) and either a stand mixer or handheld mixer. This dairy-free lemon frosting is perfect for spreading and piping work, with an adjustable consistency!

Baking as a vegan needn't be tricky these days, and with many baking basics, they require simple ingredient swaps and are no more complicated than the non-vegan version. Luckily, that definitely seems to be the case with vegan frosting! Having already recently shared methods for making plain vanilla buttercream and a lemon glaze icing, now it's the turn of this vegan lemon buttercream frosting.

This easy dairy-free lemon buttercream is bursting with tangy citrus flavor and a creamy, rich sweetness—and you can't even tell it's vegan! Once prepared, it's thick and fluffy enough for both spreading and piping (with a piping bag) over cookies, cakes, and cupcakes (our favorites are fruity combinations, like vegan lemon cupcakes, as well as blueberry, raspberry, and strawberry cake/cupcakes!).

Best of all, this recipe requires just 3 ingredients and can be prepared with or without a stand mixer, so let's jump right in!

An average-sized lemon yields between 2-3 tablespoons of lemon juice and around a tablespoon of lemon zest.

Not all powdered sugar is vegan, as they often use bone char during the processing. However, organic sugar is always vegan, and there are brands labeled vegan, too.

If you only have salted, it will work but will affect the flavor and won't allow you to control the amount of sodium added to the vegan lemon frosting recipe.

1) First, zest and juice the lemon. Avoid the white pith when zesting, as it's bitter.

To get the most juice from the lemon, roll it several times across the kitchen counter. It can help further to first microwave the lemon for 20-30 seconds, until warm. Then, save any leftover zest and/or juice in an ice cube tray in the freezer for 3 months.

2) Either in the bowl of a stand mixer or in a bowl using a handheld electric mixer, add the room temperature vegan butter and beat for 2 minutes at medium speed.

3) Next, slowly add the confectioner's sugar, a little at a time, while continuously beating until it's thoroughly combined and smooth. Then, add the lemon juice and zest and vanilla extract and beat for a further 3 minutes, or until light and fluffy!

Don't add too much powdered sugar at a time, or you'll end up with a cloud of it across yourself and your kitchen.

4) Finally, give it a taste and adjust the amount of lemon/vanilla to taste. Adjust the texture if necessary as well. As written, this recipe makes for a thick lemon frosting, perfect for piping. If you prefer something a little smoother, thinner, then add some plant-based milk, one teaspoon at a time, until you reach your desired consistency.

You can store the prepared vegan lemon frosting either in the refrigerator (5 days) or freezer (up to 3 months), covered tightly, or in an airtight container.

Before using it, allow it to come back to room temperature and lightly beat once more to return it to the light and fluffy consistency.

Once it's ready, this vegan buttercream frosting is perfect for using over round cakes, sheet cake, fruity cupcakes, within macarons and other 'sandwich' cookies like this Peanut Butter version, and more!

Can I use vegan margarine instead of vegan butter?

It's not recommended. Dairy-free margarine usually contains more water, so the consistency will differ, and it won't set in the same way as regular buttercream. However, if it's all you have, you can try it.

How do you thicken buttercream?

Adding extra powdered sugar will help to thicken the frosting but will also make it sweeter, so feel free to add a pinch of salt to balance the sweetness.

Alternatively, if you're preparing the vegan lemon buttercream frosting specifically as stiff piping, replacing half of the plant butter with vegan shortening may be beneficial.

How much does this recipe make?

This recipe should make enough to cover a two-layer 8-inch cake, 9x13-inch sheet cake, or around 12-16 piped cupcakes (more if spreading with a knife).

Can you make vegan buttercream without a stand/electric mixer?

It is possible; it will just take longer and be more effort. Simply use a large bowl and wooden spoon.

How do you remove wax from a lemon?

Luckily, it's pretty easy to do. First, place the lemon in a bowl and pour in some boiled water and allow it to sit for 10 seconds. Then, use a vegetable brush to gently clean the lemon under warm running water. 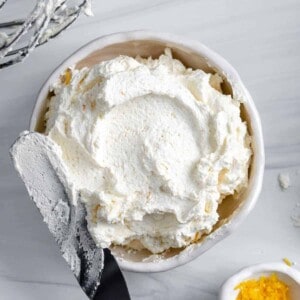 This frosting is thicker and best used for piping. If you’d like it to be a little smoother, add in more plant-based milk by the teaspoon until you reach your desired consistency.