Make vegan calzones (vegan pizza pockets) with store-bought or homemade vegan pizza dough! Load them up with your favorite fillings, fold, and bake for a hearty snack or meal! Plus, these veggie calzones also freeze and reheat beautifully! 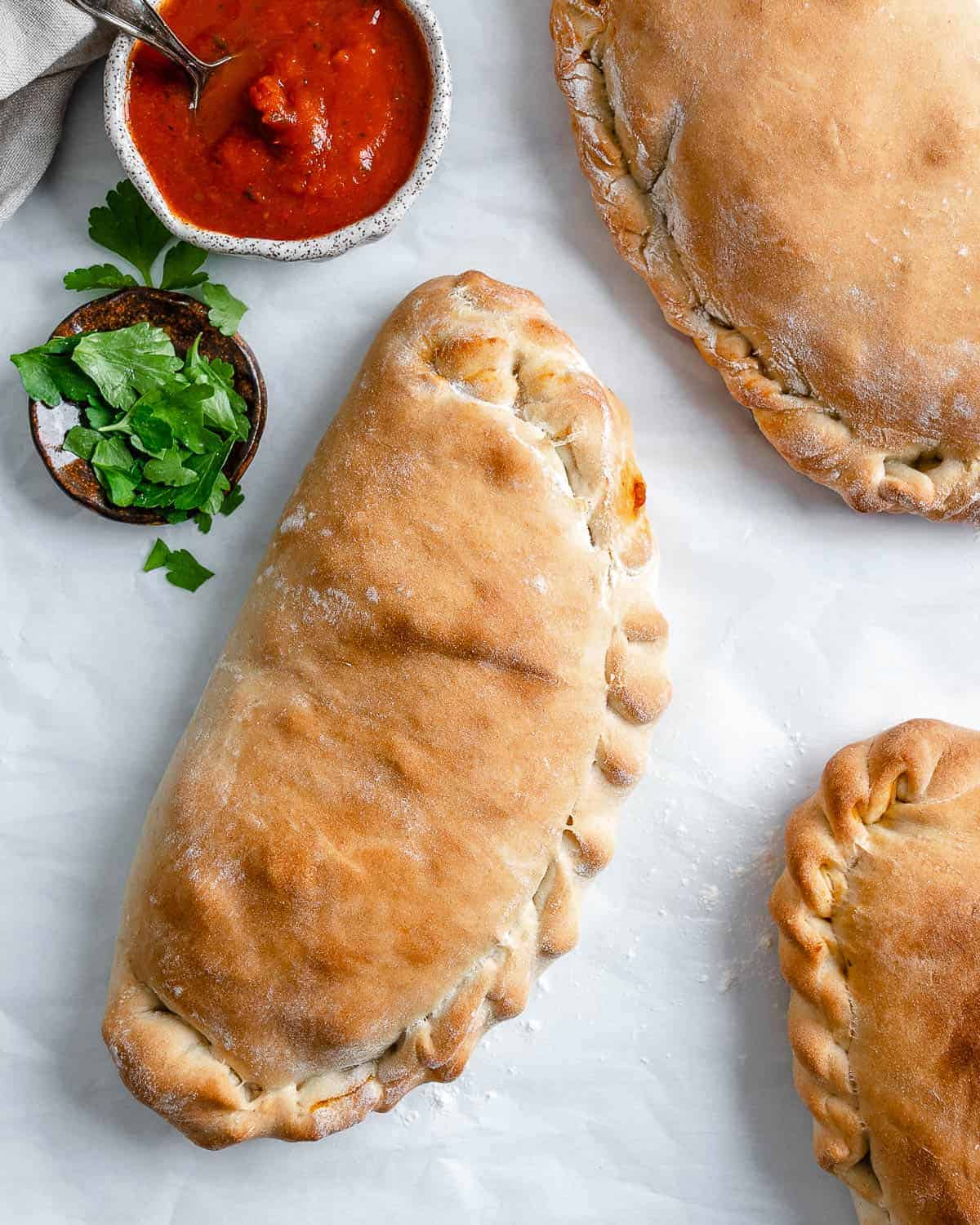 What is a Calzone?

Simply put, a calzone is an inside-out version of a pizza. These delicious 'pizza pockets' have you load up your pizza dough with the tomato sauce, vegan cheese (optional), and fillings of your choice and then fold it into a half-moon shape, then bake to perfection. If you're a pizza fan, you will love this vegan calzone recipe. They have a crisp outer crust with a lightly chewy and filling-packed center.

While calzones don't get the same amount of love as your traditional open-faced pizza, they are the perfect option for those who take the 'more is more' approach when topping pizzas. You can load calzones with tons of fillings and then fold them into a closed pastry, so it's all sealed in.

Even better, just like pizzas, these vegan pizza pockets (vegan calzones) are super versatile. Which means they are great for 'clearing out the fridge.' Plus, their handy shape and size (make large, extra-large, or even mini calzones) make them a great grab-and-go option for a meal on the move!

This vegan calzone recipe prepares them from scratch, dough included. Of course, if you'd prefer, you could use store-bought vegan pizza dough.

When it comes to choosing the calzone fillings, the options are plentiful. 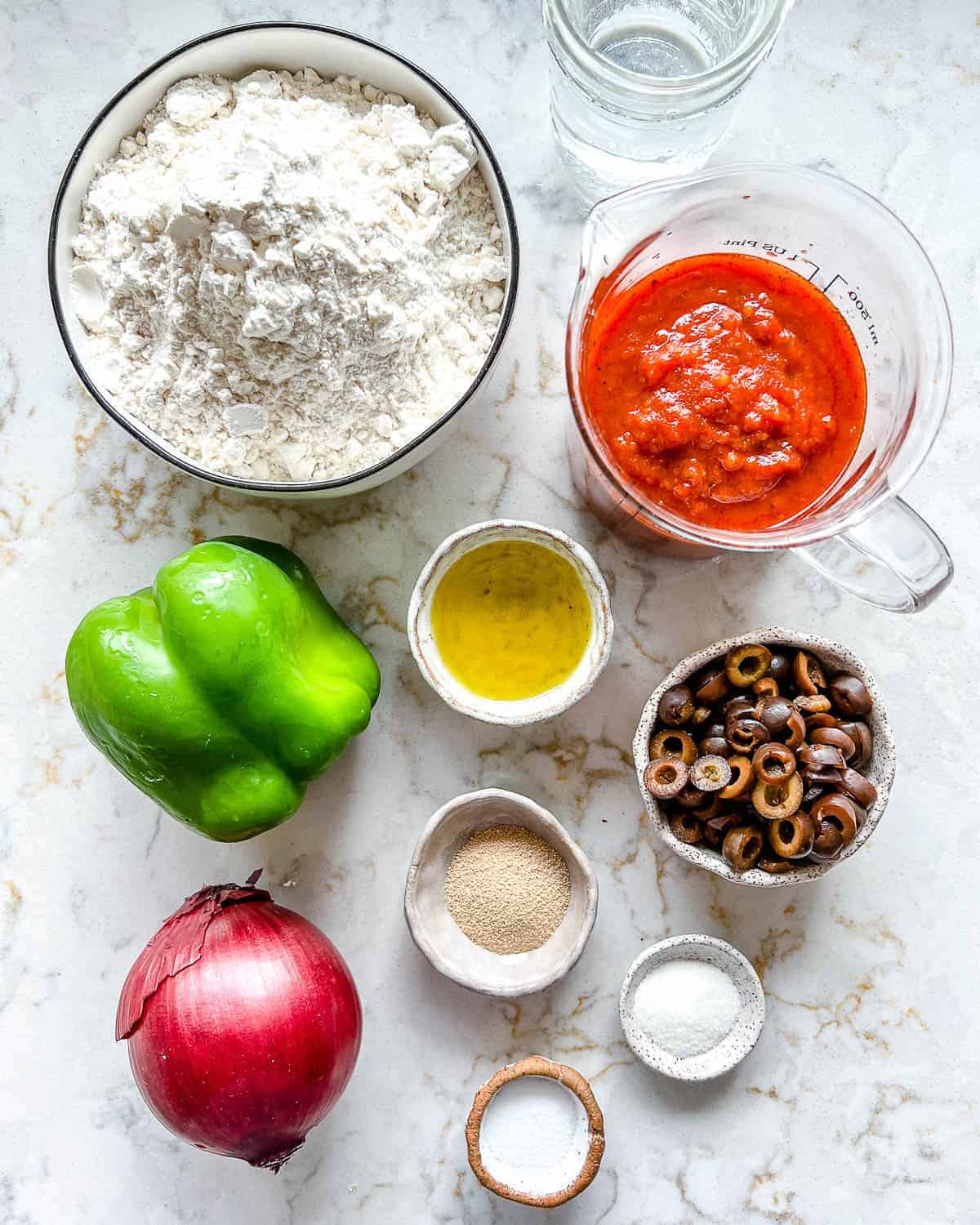 When filling the veggie calzone, you can treat them similarly to regular pizza and load them up with all your favorite veggies and meat alternatives, including:

When making mixed vegetable calzone, use as few or many of your favorite veggies as you'd like!

You can also make dessert calzones with fillings like berries and vegan chocolate (or vegan Nutella), pb&j, or an apple strudel filling!

How to Make Vegan Calzone From Scratch?

To prepare the vegan pizza dough: 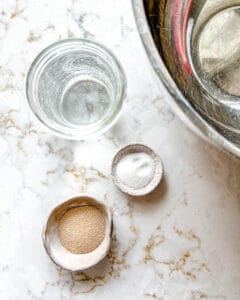 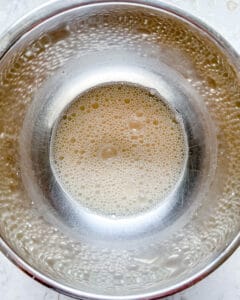 2) Then, add the olive oil, flour, and salt, and mix well until it forms a dough. 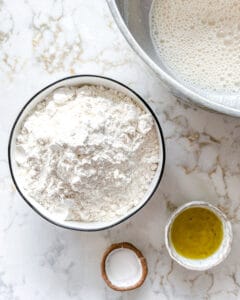 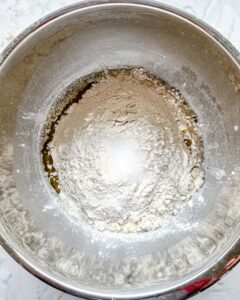 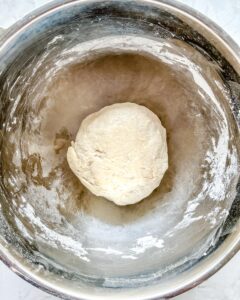 3) Remove the dough from the bowl and knead it on a lightly floured surface for several minutes until it's soft and elastic. Then set it aside for 10 minutes to rest. 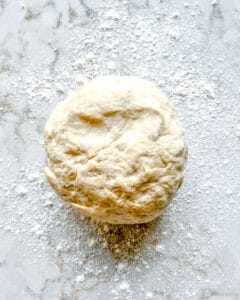 To assemble the vegan calzone:

1) Divide the dough into 3-4 balls, depending on how big you want the calzone to be. You could even divide it into 6 pieces for mini calzones. 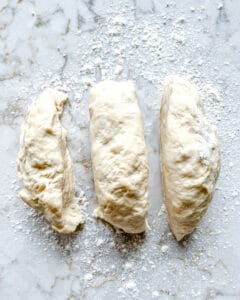 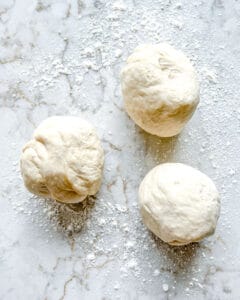 2) Then, stretch or roll (using a rolling pin) each ball out into a circle of dough, around ¼ inch in thickness. 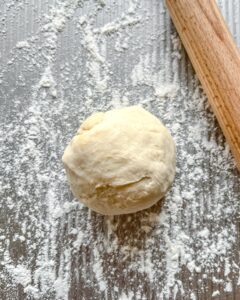 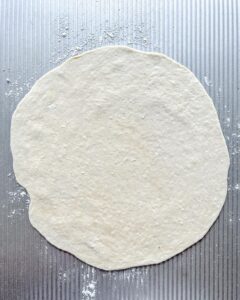 You can do this on a well-floured kitchen counter or directly on a baking sheet. If you're able to do all the following steps on whatever surface you plan to bake them on, it means no worrying about them splitting while transporting to the oven!

3) Spread a generous layer of marinara sauce per calzone, leaving a 1-inch border around all the edges. 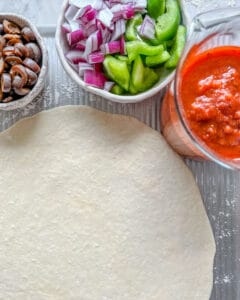 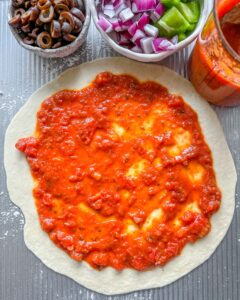 4) Then, place the chopped vegetables over the sauce (and optionally vegan cheese) on one half. 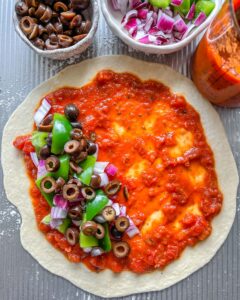 5) Fold one-half of the dough over the fillings and pinch/crimp the edges of the dough together to seal. We like to roll the edges up and over once. Repeat with the remaining veggie calzones. 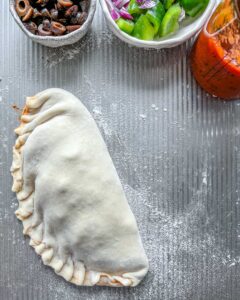 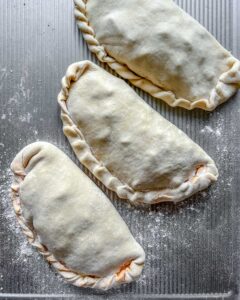 Use a fork or knife to make a few 'vents' in the vegetable calzones for steam to escape.

6) Then transfer the vegan calzone to the center of the oven and bake for 15-20 minutes, or until golden brown. Then remove from the oven, cool for a few minutes, and serve!

You can enjoy the baked calzone alone, with a side of extra marinara sauce for dipping, or as part of a meal with a side salad.

Once baked, store the veggie calzone in an airtight container in the refrigerator for 2-3 days.

You can also freeze the baked or unbaked calzone. Allow them to cool first (if baked) and flash freeze on a baking tray. Then, transfer them to a Ziplock/Stasher bag for 3 months. To thaw, allow the vegan calzone to sit in the refrigerator overnight.

To cook the unbaked calzone from frozen, you'll need to increase the baking time to 25-30 minutes. You can check the middle is fully cooked using a thermometer (it should reach 160F/71C). 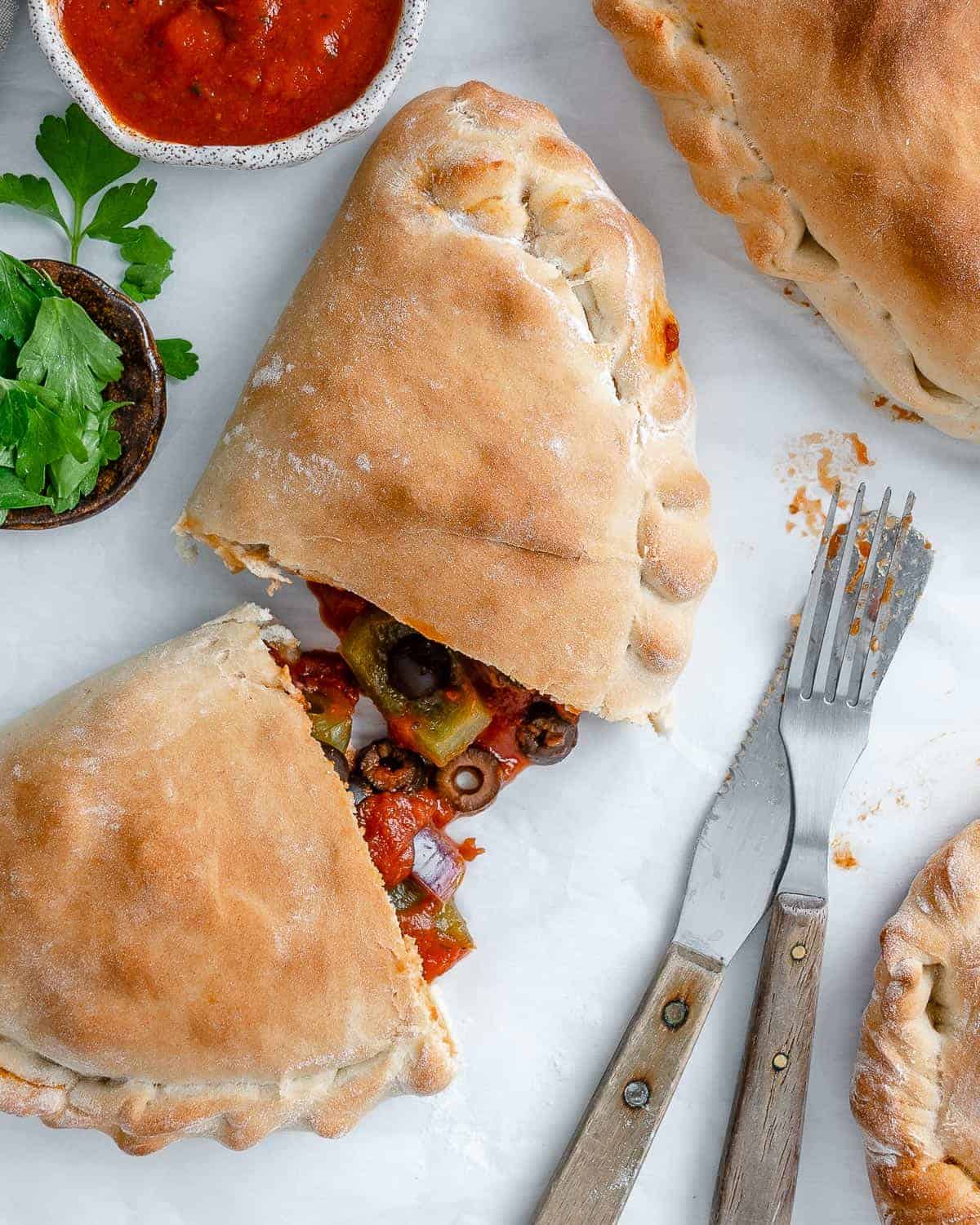 Is there a difference between pizza dough and calzone dough?

Not usually. While the two use the same dough, it's the way they're assembled that differs. Unlike regular pizza, these vegan calzones wrap the dough around the fillings as a closed 'pizza pocket.'

What is normally in a calzone?

Traditionally, calzones are made with most of the same ingredients as a pizza. Some versions omit the sauce entirely and, instead, serve them with a marinara dipping sauce. This vegan calzone recipe allows you to do the same with your favorite vegan alternatives!

Can I prepare the vegan pizza dough in advance?

Yes, in fact, making it in advance will allow the dough to ferment and leave a better flavor overall. To prepare it in advance, transfer the dough to a lightly oiled bowl (wrapped with plastic wrap) in the refrigerator for 1-2 days. It will do a slow rise in this time. So when you're ready to use it, remove it from the refrigerator 30 minutes in advance, and punch down the dough before continuing with the recipe. You can also freeze the prepared dough for up to three months!

Can I use a stand mixer to prepare the dough?

Absolutely, the stand mixer can mix and knead the dough over medium speed until soft, smooth, and elastic. 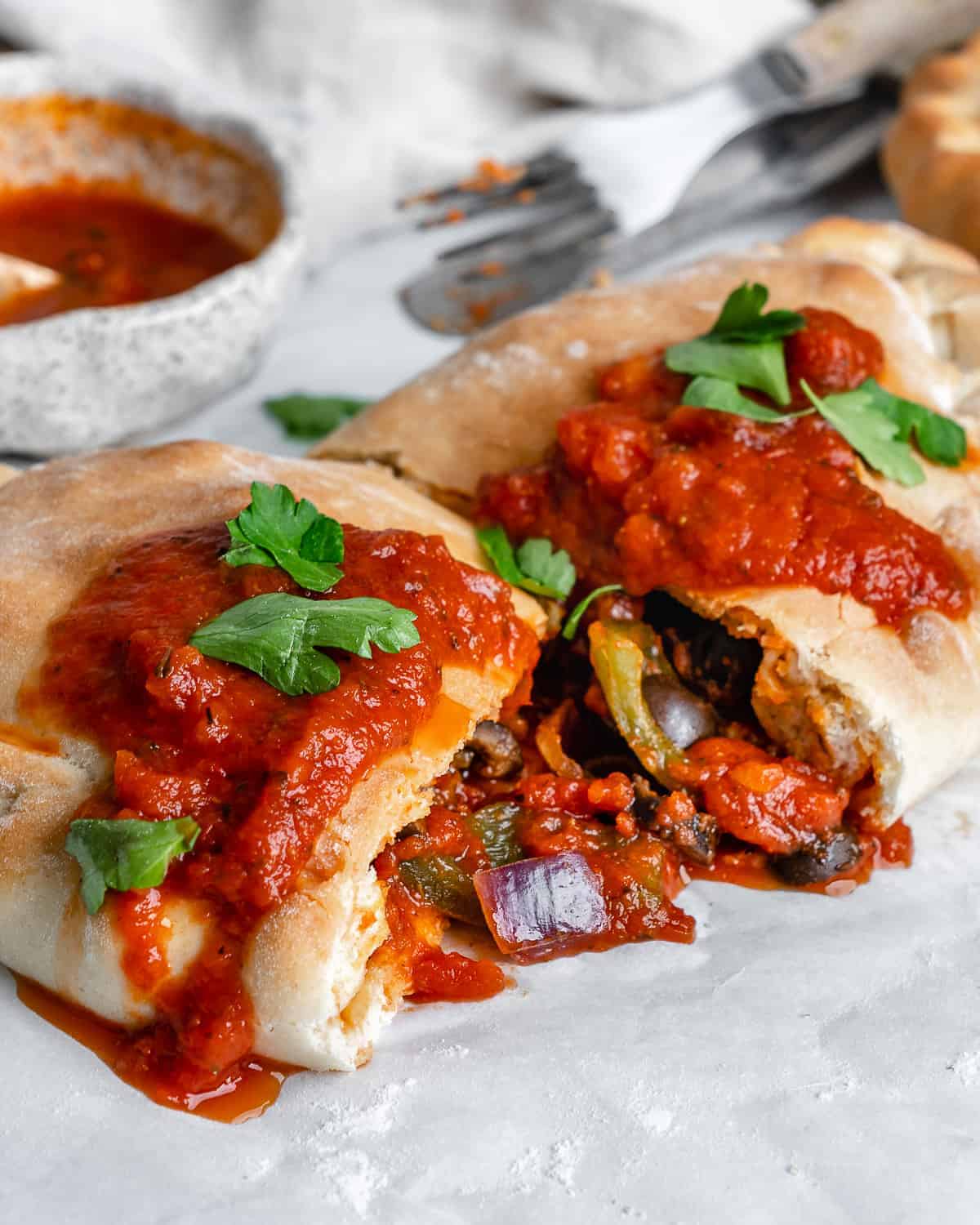 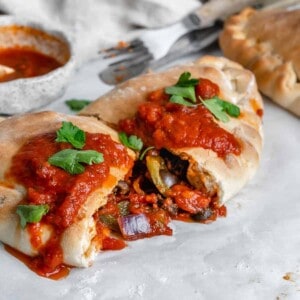 The warm water should be warm to the touch but not too hot. If it’s too hot, it can kill the yeast.