As winter ends and spring nears, vegan potato leek soup is a nice bridge between the two seasons. It's super creamy and flavorful while using minimal ingredients and goes together quickly and easily!

Potato soup is one of those dishes that works great on a budget. It’s made with simple, inexpensive ingredients. Plus, it freezes great so you don’t feel like you will waste any of it! Even better, potato leek soup is easy to make vegan!

It’s hearty enough to be the main dish, especially when served with a loaf of focaccia bread, fluffy biscuits, or a small salad on the side.

If you love this vegan potato soup recipe, you might also enjoy this lentil and potato soup or squash and sweet potato soup.

What Goes Into This Recipe

Potato and leek soup is made with just a few simple groceries you can easily pick up at the store in a matter of minutes. Here's what you need:

TOP TIP: Leeks need to be cleaned very well before cooking. Tiny grains of sand hide in between the tightly layered leaves and will make the soup gritty if they aren't properly cleaned. It's help to wash them before slicing and then again after slicing to make sure all the sand is gone.

How To Make Vegan Potato and Leek Soup

Here's what goes into making this easy soup recipe. For more, check the detailed instructions in the recipe card.

Why is my potato soup gluey?

This happens when the soup is blended too much or you used the wrong type of potato. For best results, use an immersion blender and blend by pulsing. If you must use a regular blend, do it in small batches and pulse quickly to avoid over blending the soup.

Can I leave the skin on potatoes in soup?

Most definitely if you want! The soup might not be quite as creamy as it would be with them peeled but it still tastes delicious and contains all the nutrition in the potato skin. Just be sure to thoroughly wash and scrub your potatoes.

How do you thicken potato and leek soup?

Generally, simply blending the soup will make it thick and creamy but if you want a thicker soup, remove one-half cup of soup from the pan and whisk in one tablespoon of cornstarch. Add this mixture back to the pot and cook until it thickens.

Which part of the leek do you use in soup?

The best part of the leek to use in soup is the white and white-green part of the soup. The green tops are rather stringy and not well suited to using to make soup. You can save them and fry them until crispy and add them to the top of the soup. 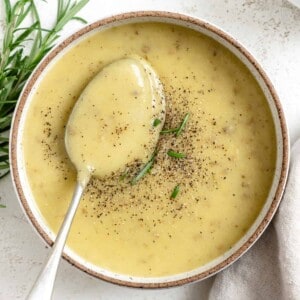